The Monte Castillo caves, located in Puente Viesgo, are a set of four cavities. Two are open to the public: El Castillo and Las Monedas.

If you wish to buy online for the two caves, the intervals between the start of each visit should be of at least 60 minutes of difference. Remember to be at the box office, located at the cave of El Castillo, at least 30 minutes before the start of the first visit to obtain the tickets from one or two caves.

On the banks of the Pas River, on its way through Puente Viesgo, Monte El Castillo rises up, a cone-shaped limestone hill, which inside hides an intricate labyrinth of caves. These caves were frequented by man at least over the last 150,000 years.

Five of them have artistic expressions dating back to the Paleolithic, particularly in El Castillo, discovered by H. Alcalde del Río in 1903. This cave has been researched archaeologically, the results of which are a reference point for understanding human development and behavior in Prehistory, in southwest Europe. 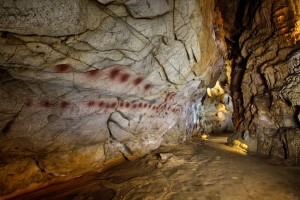 The stratigraphic sequence found there, with a depth of about 20 meters, located outside by way of a shelter, contains evidence of human occupation. Thanks to its archaeological record, it is possible to determine the environmental conditions, the flora and fauna, human anatomy, technological development, economic activities as well as social and symbolic behavior of the last 150,000 years. Its sediments and materials housed there speak of Homo Neanderthal and of Homo sapiens, of glacial and interglacial periods, of cold fauna and temperate fauna, of how hunting was organized, of planning the exploitation and use of the natural resources, of the technical processes involved in working bone, stone and antler, of embellishments as decorative elements as well as for use in society, of decorated supports as artistic expression and of social cohesion, besides a long etcetera.

The inside of the cave contains one of the most unique and important environments in Prehistoric Europe, a reference point for History. Its over 275 figures, all dating back to the dawn of the presence of Homo sapiens in Europe, represent an underground passageway through the origins of symbolic thought, the abstract mind and artistic expression.

The walls of the almost 275 meters followed by the visitor, where the majority of these artistic expressions are distributed, exemplify the techniques, themes and graphic resources used by the artists of the Upper Paleolithic to express a part of their way of thinking. At present this cave have the most ancient paleolithic art of the world of at least 40 800 years of antiquity. 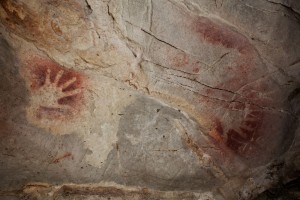 Horses, bison, doe, aurochs, stags, goats, a mammoth, etc., are part of the catalogue of animal figures, a varied bestiary representing some of the animals that lived alongside man. References to the human figure are numerous although cut short, expressed by hand, and with over 50 in this cave, they are a special motif.

The signs, geometric forms or abstractions abound. The so-called dot clouds and rectangular forms, many of them complex in composition due to segmentations and internal filling, are outstanding here. Drawings and red, black and yellow paints (applied in various manners with a brush, a finger, airbrush, etc.), engravings (in their different versions responding to the features of the grooves) and at least two simple sculptures associated with painting, show a diverse catalogue of techniques.