In the heart of the Camargo valley, near the village of Escobedo, we find this cave with a large opening and monumental sized entrance. It was discovered in 1878 by Marcelino Sanz de Sautuola. Since then, it has been subjected to numerous archaeological explorations, the latest with the discovery of an important panel of red paintings, in 1997. 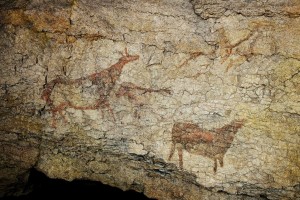 Research into this archaeological site has provided key information, and likewise applies to the El Castillo cave, as regards knowledge of human and technological evolution and the behavior of Homo Neanderthal and Homo sapiens. Thus, the stratigraphic and archaeological sequence, commencing at least 82,000 B.C. reaching up to 1,500 B.C., are a major focus of scientific debate.

Apart from shedding light on activities to do with every day life, this important set of portable art and decorative elements, associated with the first occupations by Homo sapiens, point to the fact that the underground space was used for other social purposes. During the Bronze Age, on the brink of our own society, the use of space for ritual purposes is noted since “offerings” deposited among the chaos of blocks have been found.

The most striking example of symbolic behavior are the cave wall artistic expressions found here. Up until the recent discovery of the “Painting Frieze”, only two engraved figures were known of (at least one is a bird) in the deepest part of the cavity. 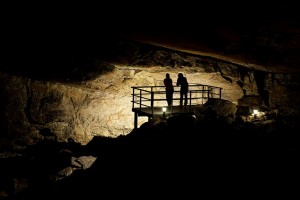 The “Painting Frieze“, a 25 meters long panel visible from all over the main vestibule, contains, by way of a large retable, twenty or so figures painted red. Highlighted here are twelve hind, accompanied by a goat, a horse, two indefinite zoomorphs and various types of signs such as dots, discs and lines, which are generally segregated over the panels where quadrupeds can be seen.

And as in the case of Covalanas, figures are displayed with a dotted outline, either by hand or inked. Some of the motifs reveal technical complementariness by combining the previous means of execution with a linear trace.

The inclusion of figures on the frieze, the technical similarities in the drawing and style (internal divisions, total or partial coloured fillings, etc.) mark a compositional unity in the paintings highlighting synchrony in execution.

The chronology, which is difficult to determine with any precision, would seem to be in an ancient period, around 20,000 B.C.