The Moro Chufín cave is located in an exceptionally beautiful setting, in the Nansa River valley. Despite the fact that the surroundings have been altered by the construction of La Palombera reservoir, its location in an area of cliffs, the dense foliage and the constant presence of water make the entire visit enjoyable.

Its spacious vestibule has witnessed important periods of human occupation occurring around 15,500 B.C. and even in previous periods. Looking out from the cave mouth must have given a privileged viewpoint over the valley, making it an excellent hunting base. 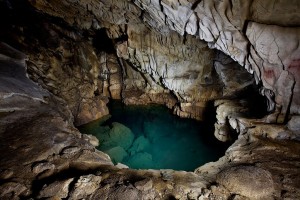 This space was also used by prehistoric dwellers who engraved figures on the rock. Numerous hind, a bison, possibly a fish and diverse signs, all set in a wide, deep groove made by the abrasion technique, are displayed mostly grouped together in a panel under which a small opening gives access to the interior of the cavity.

After passing through a space with a low roof, it opens out onto a large grotto at the end of which is an artificial lake formed by the reservoir. Despite this, the cavity continues. It is this grotto where the most striking artistic expressions are displayed, on both sides.

Because of its intense red color, red compositions made by dots stand out, some of which have been interpreted as representations of genitals. In this same color, horses, an auroch, diverse dots sometimes organized into series, a female figure and a stag can be appreciated.

The interior also houses numerous engravings made with incisions of varying degrees of fineness and abrasion. The animal bestiary comprises bison, horses, bovids, stag, goats and at least one anthropomorph figure, apart from a possible wading bird. 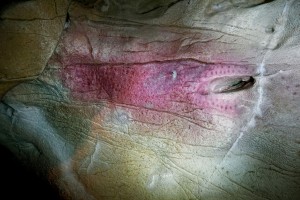 These figures would appear to have been made in the course of more than one period of time. The engravings in the vestibule and some in the interior part, as well as the red figures, may well date back to a time prior to the Magdalenian Period, to around 16,000 B.C., although it is not possible to determine the extent of synchrony or diachrony among them all. On the other hand, the rest of the engravings in the interior, generally with a finer groove and with anatomical details, are ascribed to a later period, around 11,500 B.C.