The Hornos de la Peña cave is located in the crag known by the locals as Peña de los Hornos. In this south facing crag, the entrance area stands out in the landscape for its arch shape.

Since 1903, when Hermilio Alcalde del Río discovered the first artistic cave wall expressions, the scientific importance of this cave.

The immensity and openness of the entrance vestibule attracted the last groups of Neanderthals and the first Homo sapiens to occupy the cavity vestibule, the most exterior area, as a place for habitation. Even in more recent times, during the Copper Age and even in the Spanish Civil War, this underground area was used for diverse purposes.

The first figures, nowadays disappeared, are located in the exterior area. In this entrance area, the most outstanding is a thick, deeply embedded horse motif. 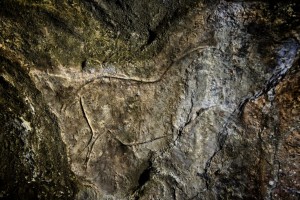 The truly underground or interior area, accessed by a low-lying, narrow passage that opens out into different sectors of medium proportions, houses the greatest artistic treasure. Hornos de la Peña displays one of the most complete series of engravings in the Cantabrian region.

The most outstanding are the large sized, naturalist conception figures. Horses, bison, aurochs, goats, stag, a bison, possibly a reindeer and a serpent-like form comprising an animal bestiary which conveys, thanks to the artist’s attention to detail (in the mains, fur, eyes, mouth, etc.), a precise knowledge of animal anatomy.

But certainly the most striking motif is an anthropomorph, with an arm raised up and a long tail. This mixed character (animal-human) in the composition, with which we are at odds to interpret, is reminiscent of figures in other cavities.

The figures were chiefly made using an engraving technique, with only one black drawing of a horse. Types of engraving are various: fine incision and the use of fingers to trace dots, representative of the interior panels, and abrasion, typical of the entrance sector.

It is especially the technical differences, apart from the stylistic conception of the figures, which lead us to think that the engravings were executed at two points in history. An initial archaic stage, corresponding to the exterior figures executed by abrasion, the chronology of which may hark back at least 18,000 years. And a second stage, corresponding to the majority of the interior figures, whose Magdalenian chronology must be at around 13,000 years B.C